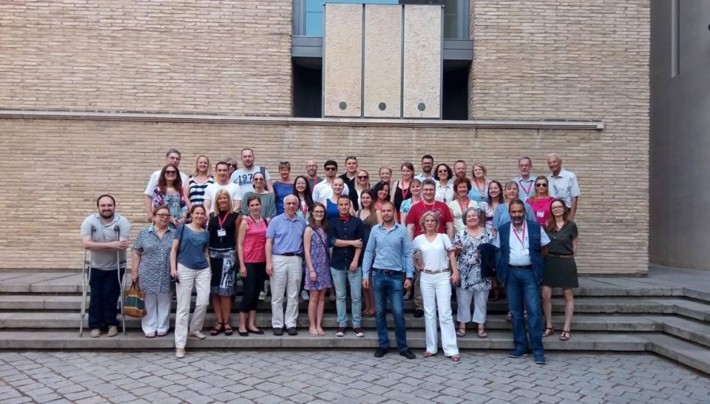 The EGA is delighted to announce that during its Biennial General Meeting in Zaragoza on 29 June, its members expressed their wish to amend the founding constitution by abolishing the differentiation between full and associate membership. With a voting result of 69% in favour of providing full rights to non-European member associations, the majority of the members expressed their clear wish that the EGA becomes a global group.
On 29 June, Pascal Niemeyer was elected by the new board of the European Gaucher Alliance as chairman. Pascal has been working on the board since 2008 and is responsible for the areas of public relations and liaison with the EWGGD. Pascal takes over from Jeremy Manuel, who decided to step down as chairman to make way for the next generation, whilst assuring his dedication to continue to support the Gaucher community by agreeing to remain on the board.
The entire board would like to thank Jeremy for his tireless engagement in building and developing the EGA for more than 20 years.
The new board was formally announced as: Vesna Aleksovska (Macedonia), Biljana Jovanovic (Serbia), Anne-Grethe Lauridsen (Denmark), Jeremy Manuel (UK); Pascal Niemeyer, Chair (Germany), Johanna Parkkinen (Finland), Jasenka Wagner (Croatia), Sandra Zariņa (Latvia), Irena Žnidar (Slovenia).
Some very interesting discussions took place during the biennial meeting. Workshops where participants were split into four groups facilitated by board members. To inspire the discussion a short introduction was given on possible subjects to discuss, based on the information given in your Country Reports which were sent in ahead of the meeting.
The board has now evaluated all the written feedback from each groups and split the issues raised into the following 3 areas:

• How to get a diagnosis, switching treatment, treatment or no treatment, social aspects of GD
• Running an association; why and how
• Creating awareness towards different target groups
Looking deeper into the feedback, the overall theme identified was “Awareness” and so it was decided that a small group within the board should look at what this means on different levels. Based on this work the group will identify possible new projects to propose to the full board at the next meeting in January.